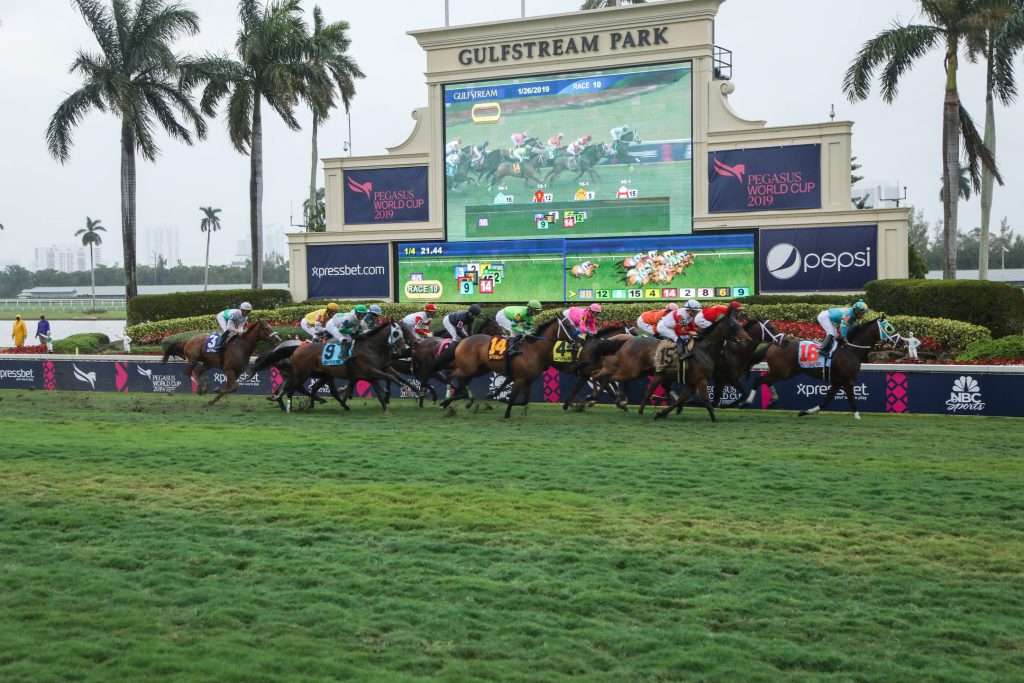 Bricks and Mortar won the inaugural edition of the Pegasus Turf last January to launch a perfect 2019 season that has him favored to earn Eclipse Awards as both male grass champion and Horse of the Year.

The list of invitees for the Pegasus World Cup Turf are:

Irish-bred mare Magic Wand and 7-year-old gelding Next Shares each ran in the 2019 Pegasus Turf, respectively finishing second and seventh. Magic Wand went on to run third in the Man o’ War (G1) in May at Belmont Park and second in the Arlington Million (G1) in August at Arlington Park before winning the Seppelt MacKinnon Stakes (G1) Nov. 9 at Flemington in Australia to push her career earnings over $4 million from 22 starts. Magic Wand is also an invitee to the Pegasus World Cup.

Next Shares, trained by Richard Baltas, capped his 2019 season by adding the Seabiscuit Handicap (G2) Nov. 30 at Del Mar to his previous graded wins in the 2018 Shadwell Turf Mile (G1) and 2019 San Gabriel (G2). In his only other try at Gulfstream, he broke his maiden in his 3-year-old debut Jan. 9, 2016 for Hall of Fame trainer Bill Mott.

Woodslane Farm’s 7-year-old homebred Sadler’s Joy is a two-time graded-stakes winner over the Gulfstream turf, capturing the 2017 Pan American (G2) and 2018 Mac Diarmida (G3). A top three finisher in 18 of his 26 lifetime starts with $2.47 million in purse earnings, Sadler’s Joy became a Grade 1 winner in the 2017 Sword Dancer at Saratoga and ended 2019 with a victory in the Red Smith (G3) Nov. 23 at Aqueduct.

Blue Heaven Farm’s Florida-bred Starship Jubilee has raced 16 times previously at Gulfstream including wins in the 2018 and 2019 Sunshine Millions Filly & Mare Turf. The 7-year-old mare owns seven career stakes wins, four of them in Grade 2 company, and earned her first Grade 1 triumph in the E.P. Taylor (G1) Oct. 12 at Woodbine.

Trainer Chad Brown won last year’s Pegasus Turf with Bricks and Mortar and has three horses on the invitation list – Instilled Regard, Without Parole and first alternate Sacred Life. Instilled Regard, on the Triple Crown trail in 2018, prepped for the Pegasus Turf with a half-length triumph in the Fort Lauderdale (G2) Dec. 14 at Gulfstream, his second start off a six-month layoff.

Without Parole won the 2018 St. James’s Palace Stakes (G1) at Royal Ascot and made his North American debut Nov. 2 in the Breeders’ Cup Mile (G1), running third to stablemate Uni, an Eclipse Award finalist for female turf champion. Sacred Life won the Prix Thomas Bryon (G3) as a 2-year-old in his native France and owns one win from four starts in the U.S., finishing second in the Bernard Baruch (G2) and Seabiscuit handicaps last year.

Michael Hui’s Zulu Alpha is the other millionaire among invitees with four career graded-stakes wins, two of them coming on the Gulfstream turf in the 2019 W.L. McKnight (G3) and Mac Diarmida. Brady Farm and OG Boss’ Mo Forza has raced exclusively in California and has put together four consecutive wins, the last three in graded company, including the Hollywood Derby (G1) Nov. 30.

Admission Office is five-time stakes-placed, four in graded company, most recently in the Dec. 14 Fort Lauderdale. A Thread of Blue, winner of the 2019 Dania Beach and Palm Beach (G3) at Gulfstream, and 2019 Knickerbocker (G2) winner Lucullan are both trained by Kiaran McLaughlin. Mr. Misunderstood is a 13-time winner from 26 career starts, nine of them stakes wins, topped by the 2018 and 2019 River City Handicap (G3), 2018 Wise Dan (G2) and 2017 Commonwealth Turf (G3).

The 2020 Pegasus World Cup Championship Invitational Series will offer a world-class level of safety and care for horses and riders along with a unique and fully engaging experience for fans and guests, both at the racetrack and online. Since it was launched in 2017, the Pegasus World Cup has become one of the most anticipated events on the racing calendar. It has captured the attention of the racing industry, celebrities and fans from around the world and has featured some of the finest international and domestic runners, including Bricks and Mortar and Pegasus World Cup winners Arrogate (2017), Gun Runner (2018) and City of Light (2019).

The 2020 Pegasus World Cup Championship Invitational Series will be broadcast live on NBC from 4:30 to 6 p.m. EST on Saturday, January 25.