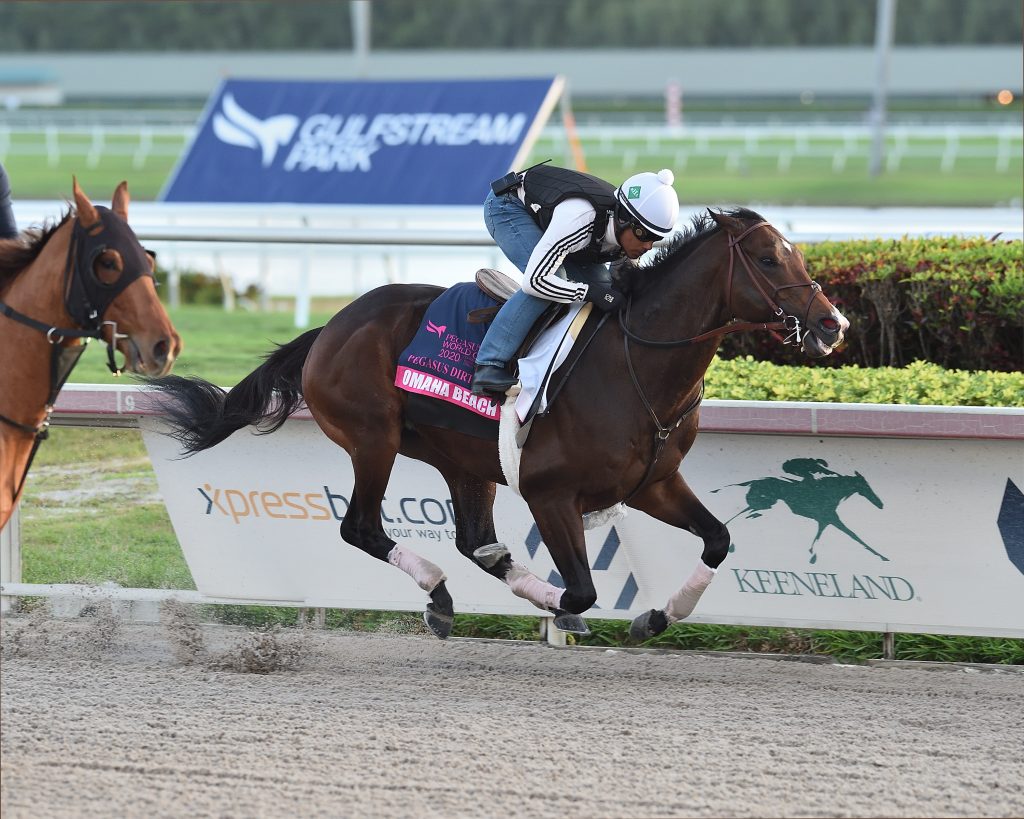 Entries will be taken Wednesday for the $3 million Pegasus and Omaha Beach, owned by Rick Porter’s Fox Hill Farms, is expected to be the heavy morning-line favorite for the 1 1/8-mile race.

“We didn’t want him to overdo it because we’re within a week of the race,” Mandella said. “The boy said he felt like a Cadillac. Actually, like a Porsche.”

Mandella was pleased with what he saw of the 4-year-old War Front colt, who will complete his racing career in the Pegasus and move on to stud duty at Spendthrift Farm.

Omaha Beach won the Rebel (G2) and the Arkansas Derby (G1) at Oaklawn Park and was the morning-line favorite for the Kentucky Derby (G1). He was scratched from the Derby when he was found to have an entrapped epiglottis and his return was delayed by illness. Omaha Beach won the six-furlong Santa Anita Sprint Championship by a head on Oct. 5, but ended up second as the even-money favorite in the Breeders’ Cup Dirt Mile (G1). He completed his 3-year-old season with an impressive 2 3/4-lengths win in the seven-furlong Malibu (G1) on Dec. 28 at Santa Anita.

Mandella said he does not expect that Omaha Beach will have any trouble stretching out again a month after the Malibu.

“He’s always been able to do what you want to do, short or long,” Mandella said. “I might have put him a little bit to sleep going into the mile of the Breeders’ Cup as a mistake. Coming out of that sprint, I was a little concerned that I jazzed him up quick to do that. I thought ‘Well I don’t want to overdo it going into the mile.’ I think I went a little bit too far the other way because leaving the gate he kind of galloped around there until he came around the field and ran a good finish. I think I had more to do with him getting beat than him.”

Hall of Fame trainer Bob Baffert, who won the inaugural Pegasus in 2017 with Arrogate, has confirmed to Gulfstream’s racing office that he will enter Mucho Gusto in Saturday’s Pegasus. The 4-year-old was third last summer in the Travers (G1) and was fourth last time out in the Oklahoma Derby (G3) in September at Remington.

Meanwhile, the Virginia-bred Realm, trained by Barclay Tagg, has been added to the also eligible list. A 7-year-old son of Haynesfield, Realm was fourth over the summer in the Suburban (G2) and fifth in the Harlan’s Holiday at Gulfstream Dec. 14 after a wide trip.